“I will abide by the results of this poll.” - Elon Musk

As a product manager, one easy decision is to give end users the tools to make decisions collaboratively, and here are three features in our Feeds API that do just that.

Ask a question, get an answer. It worked for Socrates, and it can work for your users. Whether in Activity Feeds or Object Based Feeds, comments are the cornerstone of interactivity, coming a long way from their humble beginnings as the one section of a website you absolutely should not read. Comments allow users to chime in on the posts of other users. At Weavy, we use the comments sections of our posts to give kudos, answer important questions, and sometimes have spirited discussions over important strategic decisions.

When it comes to interactive decision making the key advantage that a comments section has over chat is that unlike a persistent chat conversation, a comments section is contained. This is an easy way to create a lasting and easy to follow record of important decisions and how they were arrived upon. 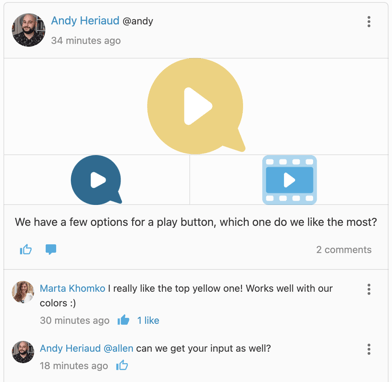 Even the most organized discussions can get complicated quickly. When there’s a lot of back and forth there are some important quality of life features that help keep the conversation on track: reactions and user tagging. Much like Feeds, both features emerged from social media. Reactions have their origins in the Facebook like, and tagging in Twitter’s @ mention.

Reactions give users the ability to “react” to a post of comment, usually with an emoticon or a simple thumbs up indicating a like. It gives users a way to show their approval for an idea without having to add a comment, as well as giving a quick view at the popularity of an idea.

User tagging gives users the ability to “tag” other users by using their @username. When a user is tagged, that user receives a notification that takes them directly to the tagged comment. This is a powerful tool to not only grab someone’s attention, but also provide a direct response to a particular user.

Of course, there’s still the gold standard of finding consensus. It’s a method that is as old as civilization itself, and has shaped how we make decision making ever since. It recently make a big splash in the news for being somewhat controversially employed to make big decisions at one of the world’s largest social networks right now. That method is polls. With Weavy’s Feeds API, users can quickly and easily post a poll with up to ten custom options. As the above image shows, Feeds not only logs responses but shows who has answered and what their answer was, meaning users can know when all important decision makers have weighed in.

Collaboration requires debate, it’s very rare that one clear choice ever emerges in life or in business. By giving your users the tools to interactively make decisions within your app, you’re making your app an integral part of their decision making process.