Product Owners: Stickiness is the Holy Grail for Retention

By now it should go without saying that retention is the single most important metric of long term, scalable, success. You see this in every segment of business: The Beatles didn’t become the biggest band because they had one #1 hit in 1964, it’s because they had six. Titanic didn’t become one of the most profitable films because it came in first place on opening weekend, but because it stayed in first place for the next fourteen weekends. No matter how good your marketing or sales teams are at bringing new customers into your ecosystem, it doesn’t mean anything if they don’t stick around.

As a product owner there’s a lot of ways to optimize your retention: you can reduce churn by maintaining great customer support and adding new features to delight users or you can use in-app messaging like notifications to prod users back into the app. But in my conversations with several product owners, one thing has become abundantly clear: when it comes to user retention and long term success, product stickiness is the holy grail.

What is product stickiness?

An app with great stickiness doesn’t have to rely on push notifications to drive engagement because users are already using it as an important part of their daily routine. It’s no coincidence that in both the consumer and business spaces, apps that have become household names are the same ones that have made themselves an indispensable part of their user’s lives. People don’t “search,” they Google, online meetings aren’t “teleconferences,” they’re Zoom calls. When using your product becomes second nature, it is truly sticky.

So let’s say my app has 4934 monthly users, and on average about 612 users log into my app each day.

That means my app has a stickiness ratio of 0.124, or a stickiness percentage of 12.4%. In other words, about 12.4% of my user base relies on my app daily. In a marketplace where 20% product stickiness is considered good, and 25% is considered excellent, that means I as a product owner still have work to do. The question is: what can be done to increase stickiness?

If you want a masterclass in retention and product stickiness, you need only look to the world’s most profitable company: Apple. In 2011, the iPhone, which had only a few years earlier launched to record breaking sales, was at a crossroads. The first Android powered phone launched late in 2008, and in the subsequent three years Apple had ceded significant market share. Dropping from almost 60% in 2009 to less than 37% by 2011. Yet, by 2013 over half of smartphones in the US were iPhones, where they’ve stayed ever since. What solidified the iPhone’s position in the US market was simple as it was significant: iMessage.

When iOS 5 was released to iPhones in late 2011 it came with a new version of the text messaging app called iMessage. The pitch was simple: iPhones could communicate with other iPhones with end-to-end encryption, rich file sharing, the ability to send messages from your Mac, and all without counting against SMS or MMS limits. The changeover was seamless, save for one small change, iMessages were sent in a blue bubble, while SMS messages remained green.

Year over year, Apple has steadily widened the gap between iMessage and SMS by adding features like read receipts, reactions, and more robust group chat features. This widening gap has contributed to what many pundits and social psychologists have dubbed “the green bubble effect,” where users have expressed reticence to switch to Android in fear of becoming the green bubble that breaks a long standing group chat. By improving a fundamental part of the phone experience: chat, and making it exclusive to their platform, Apple found a way to dramatically increase the stickiness of the iPhone. It’s hardly a coincidence that in the decade since Facebook, Google, and a smattering of startups have all tried to capture the consumer Chat market. Chat is the trojan horse of app stickiness.

The shortcut to stickiness

As a product owner, one of the simplest ways to increase stickiness is to reduce the number of occasions that your user needs to leave your app. There’s more than a few ways to identify why your users navigate away from your app: interviews, market research, app telemetry. But without even looking at any of your app’s data, I have discovered the number one reason why your users are stepping out.

Imagine the day of your average user. They begin their work day bright and early at 9am by doing what? I’m willing to bet folding money that that answer isn’t going to be that they open your app, because first they check their work chats. It’s noon now and they need to discuss an issue with co-worker, once again they’re leaving your app to go to a Chat app, probably sharing the relevant screenshots and URLs to give context. Ask yourself: how can your app be sticky when users have to alt-tab away to get work done?

We’ve identified a problem with your app’s stickiness. Users have to leave in order to do one of the most vital parts of their job: communication. As we’ve learned from Apple, doing something as simple as adding Chat natively to your app can be the difference between it being something your users like to use and something your users can’t imagine leaving behind. The numbers don’t lie: over 33% of adults cite Chat as their preferred means of communication, so adding it directly to your app is a great way to make it an indispensable part of your users’ workflow.

It’s difficult to overstate the benefits: not only are you increasing user reliance on your app, but you’re removing a source of friction they may not even be aware of. Prior to the pandemic, a study by RingCentral showed that workers switched between apps on average 10 times per hour, adding up to 32 hours of lost productivity per worker per year. Now that remote and hybrid work have become the rule rather than the exception, the issue is only going to compound. But adding collaboration features like Chat not only help address the productivity loss, but it can also make your app the place where true contextual collaboration can occur.

How to add chat to your app

Now if you’re the product owner for Salesforce, then congratulations, your company just spent over $27 Billion to bring Slack directly into your app. They’re not alone, in the past several years, every major productivity app developer has taken steps to integrate Chat more deeply into their product offering. In order to do so they’re throwing massive amounts of money and people at the problem.

Thanks to the prevalence of white label APIs and SDKs, those of us living in the sub-$1 Billlion valuation world can add robust in-app Chat at a lower cost and in a fraction of the time to develop in-house. Stickiness is the Holy Grail of user retention. When an app is truly sticky, a user will keep coming back to it without any prodding or suggestion. By taking something like Chat, a vital feature that users have to engage with hourly, and integrating your app, you can increase your product stickiness quickly and affordably. 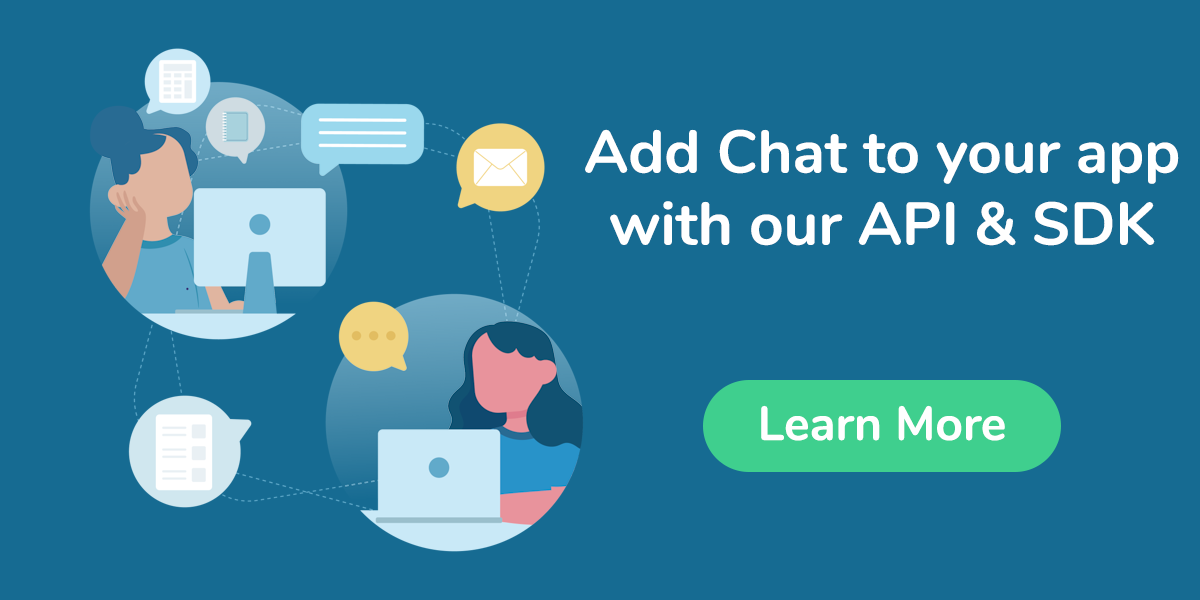