How can object based feeds make users more efficient?

“There can be economy only where there is efficiency.” - Benjamin Disraeli, Earl of Beaconsfield, Viscount of Hughenden, and the only UK Prime Minister to go by the name “Dizzy”

Despite what any micromanager may tell you, there’s a difference between doing your most and doing your best. That difference is efficiency: the ratio of useful work to energy expended. There was a boom in the adoption of productivity oriented SaaS products in the last few years as organizations large and small scrambled to bring most of their office productivity to a hybrid work setting. As the dust settled on the question of whether or not we could make hybrid work more effective a new question emerged: how do we make it more efficient?

To answer this question product managers kicked off a collaboration arms race to bring vital collaboration functions and community features into their apps. Whether developed in-house or integrated via API, these functions aim to add value for end users by bringing more of their daily activities into the app where they work. But what if you could take it a step further? With object based feeds, you can give users an unparalleled level of efficiency. 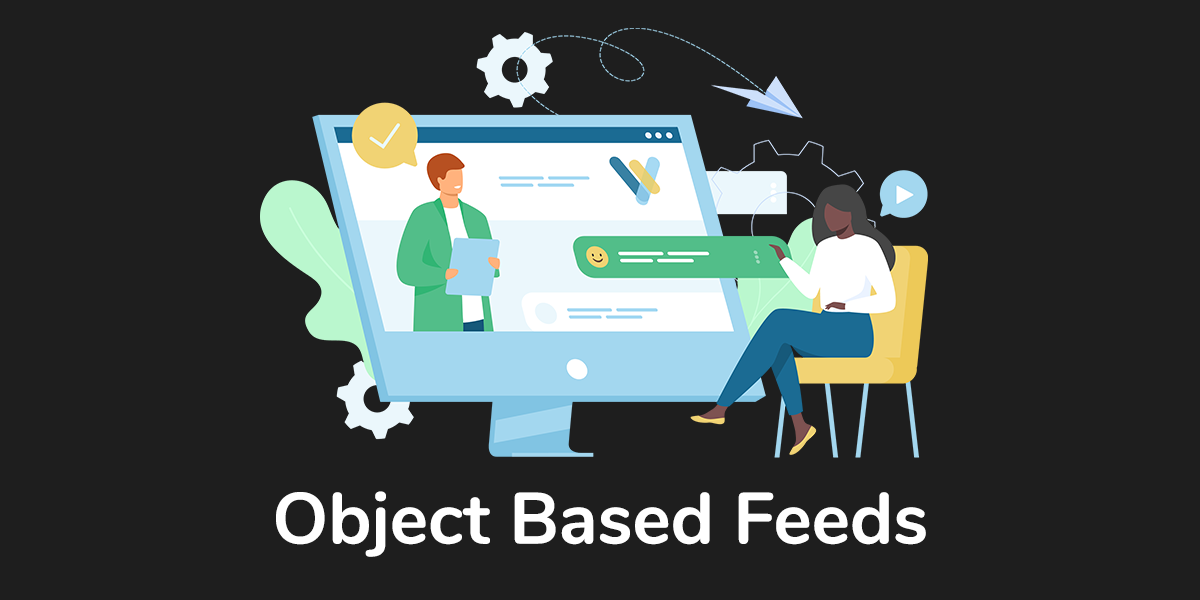 But before I can explain the power of object based feeds, we need a little context.

When it comes to productivity, one of the primary benefits of contextual collaboration is the reduction of app switching. App switching is exactly what it sounds like: switching between apps in order to accomplish different tasks. Every time a user moves from a CRM to Slack to ask a question, they’re app switching. But this comes at a cost. According to research from Asana, app switching has lead to:

You may be incredulous that the simple act of switching from one app to another could cause so much loss, but consider this: how many times have you walked into a room only to forget why you did? Humans are famously bad at multitasking complex tasks, and forcing them to hold two complex ideas in their head as they move from one user interface to another is a recipe for forgetfulness and waste.

What are object based feeds?

Object based feeds take the functionality of activity feeds and center them around one of several objects, or elements, of your app. Think of object based feeds as contextual activity feeds. Your users know how easy it is to see a photo on social media and leave a comment, but imagine if they could do that for a new version of their corporate logo. Or even better yet: a spreadsheet. Now imagine an entire threaded conversation with user tagging over even a single point of data. Object based feeds allow users to do just that.

The above image shows a mock-up of a CRM using Weavy's Feeds API, along with fictional contact cards. In this example, each contact is treated as an object, and each object has a unique feed where users can share updates, give feedback, comment, or even post images and upload relevant files. It's easy to pick up because end users have already learned to use similar community features. Object based feeds give users the ability to create spaces dedicated to the task they’re working on in the most logical place possible: where they’re working on it.

This simple but powerful paradigm shift reduces one of the biggest pain points in modern productivity: working on work. In the same Asana study, managers on average said 67% of their time was spent “working on work.” Working on work is unavoidable: any time we need to clarify a point, write a corporate style guide, or develop a new internal process we’re working on work. But all of those processes are valuable, they contribute to making the workplace more effective.

Object based feeds not only help expedite valuable working on work, they also severely curtail the most insidious form of working on work: talking at cross purposes. How many times have you had an entire conversation with a colleague about a document only to realize you were discussing two different documents? This is a trap people fall into all the time, and the results are exactly what you would expect: redundant work, missed deadlines, and even interpersonal contact. Some data suggests as much as $37 billion is lost annually to miscommunication.

Contextual activity feeds like object based feeds sidestep ambiguity by contextualizing workplace conversations. It’s easy to know exactly what document users are giving feedback on when that feedback is right next to the document being discussed. With the time saved not having to clarify these little points, users have more freedom to get the real work, not the working on work, done. When an app can give users that level of efficiency, that app becomes indispensable not only to them, but their organization.