Why Hybrid Work is here to stay

Last December, seemingly ignoring staggering inflation, a bear market, and a prohibitively expensive ad campaign featuring Matthew McConaughey, Salesforce CEO Marc Benioff accused his new remote only hires of being responsible for the company’s below average growth in 2022. In the spirit of the buck stopping anywhere else, Benioff asserted that remote workers were less productive than their in office counterparts. He has since doubled and tripled down on this sentiment, while offering no data to support it or plan to address it.

It’s understandable that companies around the world are evaluating how to conduct business in a world where our tools to fight COVID-19 are more robust. Unlike Salesforce, which seems content to figure something out once they’re done firing people reducing their workforce, most companies are looking for the most viable path forward. While some companies have decided that fully remote work is here to stay, and others have decided to roll back almost completely, most have begun the transition to a new paradigm that experts call “hybrid work.” 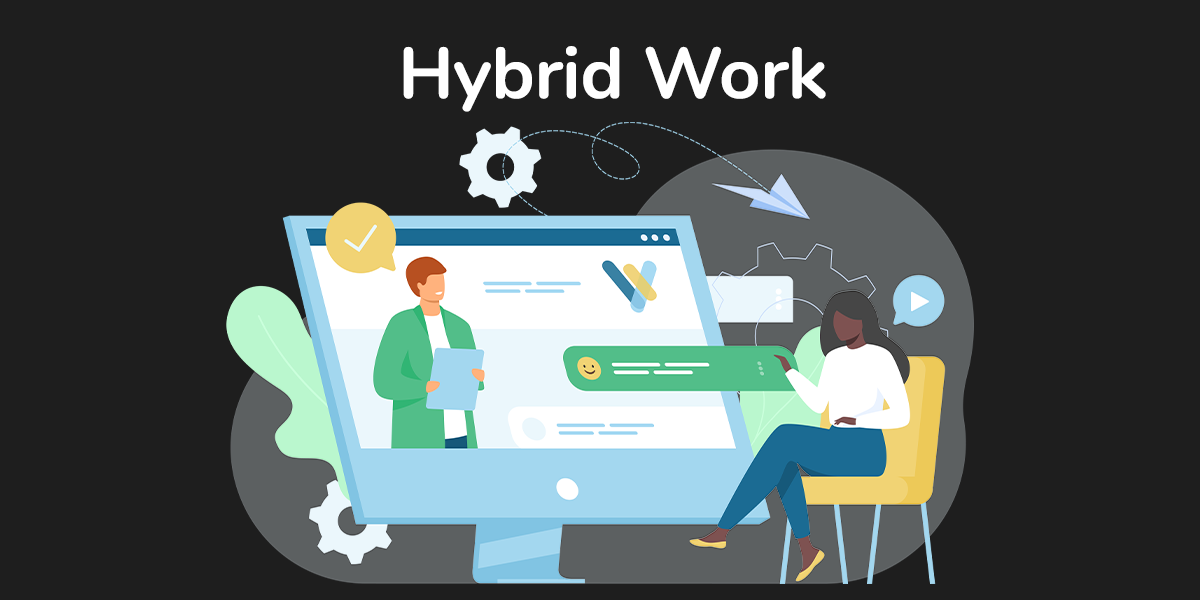 What is hybrid work?

Broadly speaking, hybrid work refers to any workplace model that blends in-office work with remote work. This can take a few different forms. One approach is to have a blend of full-time in-office staff working alongside a fully distributed team. Another approach, currently popular with large tech companies like Apple, asks workers to divide their time between in-office and remote work, with some even giving greater flexibility as to which days and hours an employee can choose to work in-office.

The first approach, which blends full-time in-office staff with distributed staff certainly has its appeals. Having a traditional office allows employees to have a shared space to work, meet, and collaborate face-to-face, while also giving executives space to conduct high level meetings without having to be concerned with telecommunications outages or household distractions. On the same token, having the ability to support distributed team members enables a company to find the best employees from around the world, without having to be concerned about whether they can make the commute.

This shift has been a blessing not only for skilled workers outside major metropolitan areas, but also for persons with disabilities who have been largely shut out by limits on remote work in the past. Though there are some valid concerns to be had over potentially creating a culture of haves and have-nots between office and remote workers, there are plenty of proactive steps that can be taken to avoid these situations.

The currently en-vogue approach among many of the tech giants to divide employee time between home and the office seems to be largely born out of finding a compromise between employee desires and employer concerns. Though some of the stricter proposals to this approach have been met with resistance, many employees seem to favor a version of this model. On paper it makes sense: employees have the freedom to work in the way that best suits their style, while giving them the option to use an office for functions that might not be as conducive to remote work.

For example: most of my day to day work can and has been successfully done from home for most of my career. But when it comes to more technical tasks such as video production or audio recording, I’d much prefer to have a dedicated office space purpose-built to help me work effectively, and look forward to having that option in the future.

Of course, committing to this model means once again creating geographic limits on your hiring pool. While this may not be a concern for companies that can afford to offer relocation services, small to mid-sized organizations must once again factor in commute times and cost of living when staffing. Should you choose to selectively employ remote workers, regardless of why they are remote, you’ll have to work that much harder to ensure that your remote employees feel as integrated into the team as hybrid employees who have the benefit of in-office face time. While hardly a deal breaker, it must be considered.

Why hybrid work is here to stay

As anyone with experience in trial law is fond of reminding you: you cannot unring a bell. People have gotten used to some of the benefits of being able to work flexibly: the lack of commute, more time spent with family, just to name a few. Though there have and will continue to be some growing pains, the feared productivity crisis never came. Research shows that over half of employers believe that productivity has increased since transitioning to work from home. The breakneck pace in development for collaboration apps and features will only make working from home easier as it becomes the norm.

So why the shift to hybrid work? For one reason: some people just prefer to work in an office. Many workers treat the office and commute as crucial components to maintaining a healthy work/life balance, and in the same research that showed high employer satisfaction with work from home, only 34% of employees reported feeling more productive working from home. Though it should also be noted that the primary concerns raised by employees were a lack of extended childcare benefits or adequate training for managing remote workers.

Another concern, primarily raised by employers, is that the office serves as a vital social hub and losing it means losing good corporate culture along with it. When surveyed a plurality of employers believed time spent in-office was necessary to maintaining corporate culture, with the majority saying a minimum of 3 days would be required. Valid or not, that belief is clearly guiding employers as they outline plans for reopening offices, with three days in office seeming to be the sweet spot.

Luckily, the development of collaboration tools has taken dramatic leaps in the last year. When armed with the ability to collaborate seamlessly and contextually online, many of these concerns around productivity and culture can be addressed. By adding native collaboration features to the apps where employees work, employers can foster a hybrid work model that in the long run will likely be more effective than the older ways of working before the pandemic.

Hybrid work offers companies a chance to experiment and find a workplace scenario that can offer the best of both worlds between office and remote work. While there will no doubt be headaches along the way, it seems like the benefits largely outweigh the risk. With a little time, a little patience, and a healthy dose of trial-and-error, I think we’re going to discover that hybrid work will be the norm for decades to come.